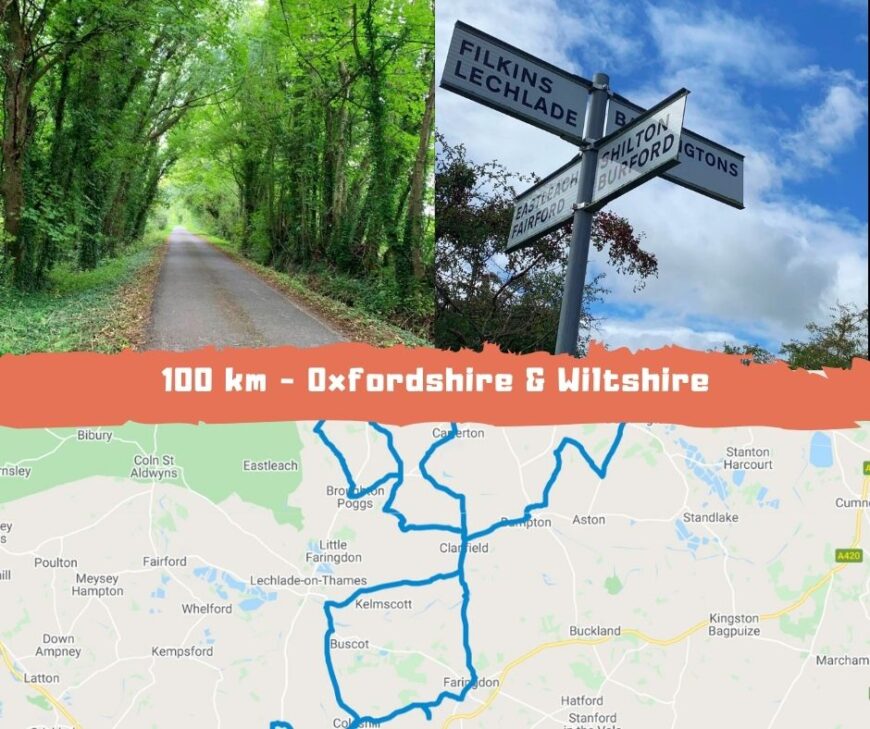 During the first Sunday in September I took on a road ride around Oxfordshire and I dipped into Wiltshire.  I didn’t plan my route beforehand and just went where the wind took me! cycling route in Oxfordshire and Wiltshire – here we go!

At the start of the ride I was planning to complete just over 50 miles but with a lot of determination before the 50 mile point I decided I would set myself the goal of getting past the 100km mark (62.14 miles), the furthest ride I have undertaken so far. 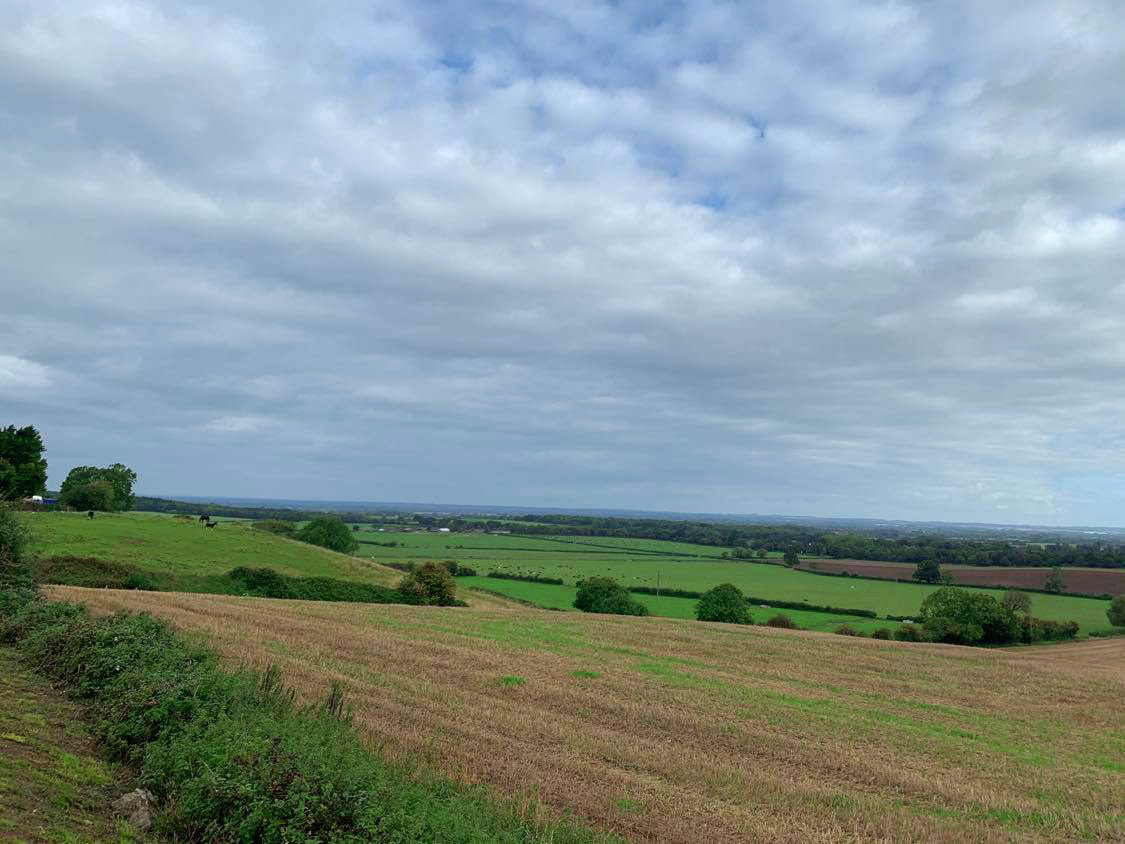 I started my ride from Carterton, headed South towards the Village of Alvescot and onwards to  Clanfield. Here I took the A4095 road to the hamlet of Radcot. At Radcot I rode over the bridge which crosses the Thames. Radcot Bridge is often claimed to be the oldest Bridge on the Thames, built around 1200. A fierce battle took place here on 19th December 1387 between loyalists to king Richard II and his opposition, and the bridge had to be reconstructed in 1393. It was also severely damaged during the War of the Roses, and was largely rebuilt as it appears today. There is a lovely pub here, Ye Olde Swan, right by the Bridge and overlooking the River. It’s a perfect spot when the weather is warm to relax with a drink in the garden.

From Radcot I continued on the road to the historic market town of Faringdon which lies at the edge of the Cotswolds and midway between Oxford and Swindon. It sits in the Vale of the White Horse. Faringdon was the first capital of Wessex, from where Alfred the Great ruled his kingdom for a while. In 1218 King Henry III gave the town a charter for a weekly market, which still exists today.

As I approached Faringdon up a steep climb I could see the Folly Tower which is 100ft tall and is the last major Folly to be built in England. Also on the right hand side as you come up the hill there is an interesting statue which I have found out was once in the gardens of Crystal Palace and in 1957 it was bought at auction and placed in the grounds of Faringdon House by Robert Heber-Percy, heir and former partner of Lord Berners who was the person who had Faringdon folly built.  The statue depicts Africa embracing Egypt.

I continued on following the sign for Highworth. On my journey I took a detour down to the village of Great Coxwell to admire the grand Tythe Barn. The Barn is approximately 723 years old and is now owned by the National Trust and was recently scientifically tested for it’s age. It is the sole surviving part of a thriving 13th-century grange that once provided vital income to Beaulieu Abbey.

After visiting the barn I continued back up to the main road on to the pretty Village of Coleshill. Coleshill became very important in the Second World War as thousands of men were trained to become Auxiliers, or members of the British Resistance here.(Churchill’s Secret Army).


From Coleshill I followed the B4019 to the Wiltshire town of Highworth. With a few climbs and descents on the route.

Highworth is an ancient hill top market town on the edge of the Cotswolds. The town is notable for its Queen Anne and Georgian buildings. I cycled round Highworth and headed back round via a housing estate with a step hill climb and got back onto the B4019 back to Coleshill. I stopped at The Carpenters Canteen in Coleshill which is situated in the Old Carpenters Yard. There is a sign on the main road directing you to the café. I sat and had a hot chocolate to warm me up!


Once I had finished my hot chocolate and warmed up, I headed back up to the main road and took a left turn passing the Radnor Arms pub down Snowswick Lane and onto the A417 heading towards the town of Lechlade-on-Thames. Lechlade is a small Cotswold town and got it’s name from the River Leach which joins the Thames just east of the town. Lechlade is a very busy little town in the Summer months and is a great place for boat hire and kayaking (one of my other pastimes).

From Lechlade I took the road on the right hand side which passes the famous Trout Inn back towards Clanfield. Once in Clanfield I carried on down the main Street and took a left hand turn (Calcroft Lane) after the bend out of the village. The Lane then comes out into the Village of Broadwell. I passed the Church on my left hand side. The Church is a large medieval cruciform church, with a north and south transept, which dates back to the 12th to 14th centuries. Broadwell then joins the Village of Kencot. I headed left on the road as I came out of Kencot which goes to Broughton Poggs and from there I took the A361, Lechlade to Burford road, then I turned off left and looped round towards Holwell and headed back into Kencot, then Broadwell and back into Clanfield taking the road with The Tavern pub on my left going towards Bampton. Bampton is referred to as a Village and a town. The Domesday book recorded it as a market town by 1086 and it continued as such until the 1890’s. it has both a town hall and a village hall. Bampton is well known for it’s film locations for Downton Abbey and Bampton doubles as the fictional village of Downton. The Church of St Mary’s features as St Michael and All Angels in Downton Abbey and the outside of the Library in Bampton was the hospital. There are coach trips which include Bampton in their Downton Abbey tours.

I took the left hand turn (Church Street) and continued out to the A4095 and crossed over the road to New Road and took the left turning along Mount Owen Road and followed the road towards Lew and onto Aston towards Ducklington on the A415 then took a left hand turn to the village of Curbridge. From Curbridge I continued to the village of Brize Norton then back to my starting point in Carterton. Feeling very tired but happy to have completed my longest cycle ride so far, on this amazing cycling route in Oxfordshire and Wiltshire.