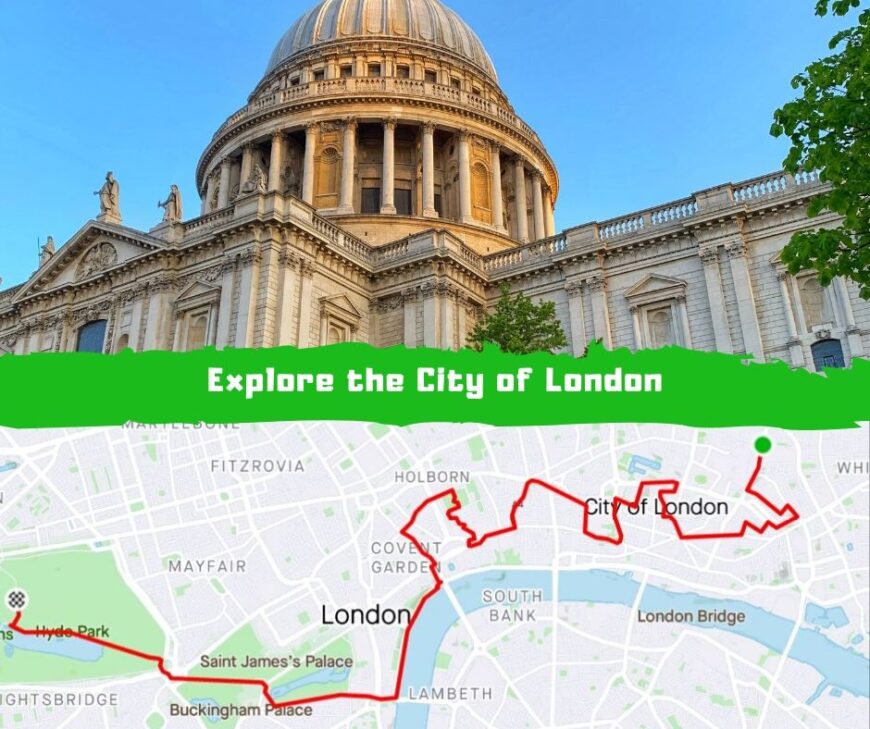 As lockdown doesn’t seem to be easing much yet, and congestion charge in central London is up and imposed 7 days a week, we find solace in the roads of the City of London, which remain clear and cyclist-friendly.
An easy beginners’ 8 miles London cycling route covering some beautiful old buildings, and rich in history.

Our starting point for this London cycling route is just where Bishopsgate turns into Spitalfield Market, in front of the RBS building, one of the well-known landmarks right on the edge of the city. A further cycle south, using the Aldgate dual bus/bike roads brings us to the mythological Saint Mary Axe building, also known as the Gherkin.

Crossing Bank station (which is named after the parallel Bank of England) we’re heading north via Princess St. A straightforward way would be to keep north, however through the small passage off Basinghall St. we can catch the extraordinary Guildhall – which is the only medieval building left in current London.

Guildhall has been used as a town hall for several hundred years, and is still the ceremonial and administrative centre of the City of London and its Corporation. The current building began construction in 1411 and completed in 1440. The Great Hall did not completely escape damage in the Great Fire of London in 1666; it was partially restored (with a flat roof) in 1670.

A small detour here through another ancient British bank – Standard Chartered, and we are back on a special cycling lane across London Wall – on route to the museum of London. However, we’re taking a left turn to Wood Street, where the City Police is.

The route from here goes straight towards the Monumental St. Paul’s Cathedral. Another option is to keep going on Q-11 (Quiet Road) which is normally quiet but would make you miss the impressive cathedral building and its churchyard.

St Paul’s Cathedral is the cathedral of the Bishop of London, and serves as the mother church of the Diocese of London. It’s located at the highest point of the City of London and is a Grade I listed building. The present cathedral, dating from the late 17th century, was designed in the English Baroque style by Sir Christopher Wren. Its construction, completed in Wren’s lifetime, was part of a major rebuilding program in the City after the Great Fire of London. The cathedral is one of the most famous and most recognisable sights of London. Its dome, framed by the spires of Wren’s City churches, has dominated the skyline for over 300 years.

The trail now takes us to Fetter Lane and Fleet Street, where the London printing press editorials used to roam, and now the west edge of the City. The only significant building that here are: on 120 Fleet Street – the stronghold of the American Investment Bank Goldman Sach’s and the Law Society at 13 Chancery Lane (which is a small detour worth taking). Further west are the Royal Courts of Justice, we pass them on the left side, and rather than continuing westwards to the Strand and Trafalgar Square (where the roads become crowded and significantly less safe) – we head north to Lincoln Inn Fields, where we can relax and freshen up).

From here we’re going to finish this route strong towards Westminster. If you would like to add a few miles a good option is to track back and reach the north bank of River Thames through Blackfriars, passing through the tunnel. On the north bank lies Cycling Superhighway 8 (CS-8) and the ride is more relaxing.

I have marked the end of this London cycling route at Hyde Park, reaching the Serpentine stream through Buckingham Palace and St James’ Park. This is a little touristic bonus at the end of the track, but in all fairness, to make this even longer one could cycle all the way to Vauxhaul bridge, making it a straight Northbound effort through Victoria station.

At this hot (and rare) summer day, I made it home to North London (adding an additional 4 miles to the journey) a bit hot, but with some great pictures to share 😉